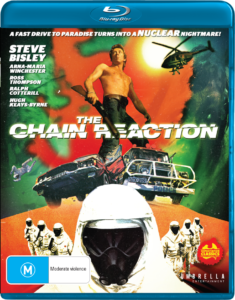 Trailing the exhaust fumes left in the wake of Mad Max, Australia’s brand of exploitation cinema reached new heights in the form of The Chain Reaction from veteran film and television director Ian Barry. Unearthed and fully remastered by Umbrella Entertainment, the obscure action sci-fi smashed its way onto Blu-ray last November, much to the excitement of Ozploitation fans.

When a leak occurs at nuclear waste facility in rural Australia, the shadowy corporate body responsible attempts to silence a lowly and badly injured engineer with knowledge crucial to public health. By the end of the 1970s the ‘New Wave’ of Australian cinema had subsided, returning the industry to a period where ambitious features were less frequent. One prime example is The Journalist, which was a mostly empty attempt at trying to create our answer to Hal Ashby’s Shampoo. The Chain Reaction seems to be of a similar mind-frame, where it tries to capitalise on the alarmist nature of The China Syndrome while re-treading over a lot of the same territory explored in Mad Max. Unfortunately, this amounts to very little in the way of story and a coherent plot, which centres around the misadventures of our hero Larry, an auto mechanic played energetically by Steve Bisley. However, the film does reverberate a feeling detachment due largely in part to the ambiguous setting, especially the ominous remains of the shale oil works in Glen Davis, NSW. Shots of the looming decaying structures do suit the film’s ’nuclear nightmare’ scenario extremely well and add a lot to the overall desolate visual style. Car chases and stunt-work provide the most exciting scenes by far, which were staged by Mad Max director George Miller, who utilises both the high-octane vehicles and rural landscape to their full advantage. Performances on the other hand do vary, although characters are an amusingly mixed bag. Steve Bisley goes all out as the put-upon Larry, who plays off the film’s authoritarian figures well, such as Richard Moir (Round the Twist) as the barely competent Constable Pigott and the more villainous Gray, played by English-born actor Ralph Cotterill.

Region A, B and C encoded, the visual transfer is quite a feat to say the least for such a lesser known title. Vibrant colours, remarkable clarity and appropriate film grain are befitting and compliment that classic Ozploitation look and feel. Sound is almost violently loud in 2.0 DTS-HD, but immersive and crystal clear, especially during action sequences.

Umbrella have provided a general assortment of bonus material, which like many their previous ‘Ozploitation Classics’ include informative interviews from the documentary Not Quite Hollywood. Featurettes Thrills & Nuclear Spills and The Sparks Obituary, explore the film’s greater meanings in retrospective fashion while trailers and TV spots give contrast to the film’s modern restoration and presentation.  The Man at the Edge of the Freeway: Early Cut is simply that, an early cut of The Chain Reaction with shoddy tracking and low resolution; perfect for trip down VHS memory lane. Alternate art is also included, which is a slight variant on the featured cover design minus the Australian rating symbol. 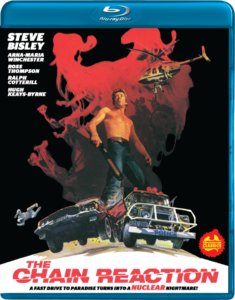 The Chain Reaction could be easily seen a cautionary tale of nuclear energy (which Australia is yet to and likely never to adopt), but feels more like a loosely bound series of events with little weight behind them. However, as a Blu-ray release, Umbrella Entertainment have once again pulled out all the stops to create an edition worthy of the collector’s market and one essential to cult cinema fans from around the world.