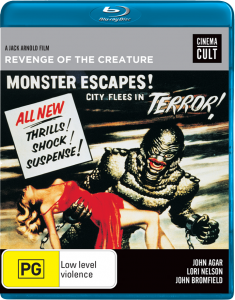 I sit down to write this review just hours after the first trailer for Clint Eastwood’s The Mule dropped online, which may very well be his last on screen performance, sixty-three after his cinematic debut in Revenge of the Creature as lowly lab assistant. Out now on Blu-ray from Shock Entertainment, under dedicated label Cinema Cult, the Gill-man sequel finds the creature from the Black Lagoon captured by man and carelessly put on display at a coastal aquarium. Suffice to say it’s not long before he escapes, leaving a trail of destruction in his wake.

Jack Arnold’s original Creature from the Black Lagoon is my favourite among the Universal Monster Classics. There’s a gracefulness and sympathetic quality to our amphibious antagonist as he watches the human intruders from afar with a mix of curiosity and anger. However, with the tables turned in this inevitable follow up, Revenge of the Creature feels less polished and lacks the seriousness from the original, despite Jack Arnold being once again at the helm. While still sympathetic to the audience, the Creature is prone to far more violent outbursts due to his captivity which also brings his performance more in line with studio’s influence over the picture. Nevertheless, if you’re a sucker for 50s B-cinema like myself, then you’re in for an enjoyable experience as the film encapsulates the universally recognised traits of an old fashion monster classic. John Agar as Professor Clete Ferguson is the film’s kindly leading man alongside Ichthyology student Helen Dobson, played by Lori Nelson, who quickly catches the Creature’s eye. Both actors give fine performances and offer a compassionate side to the story’s exploitative nature.

Unfortunately, like most Cinema Cult titles, there isn’t any bonus content to speak of, but this HD release gets points for the choice of cover art, opting for one of the original film poster images, complete with melodramatic taglines. Picture appears very smooth, but lacks texture and any real sharpness, despite the 1080p labeling, while the Dolby 2.0 track is clear and without any issues.

Revenge of the Creature follows a similar rout as the countless Universal Monster sequels that came before it. I enjoyed watching it again and I’m very grateful for the release during this difficult time to import from overseas. With a little hope, Shock Entertainment will treat fans with the final chapter The Creature Walks Among Us sometime in the near future.