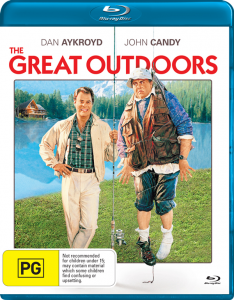 Angsty teenage drama aside, John Hughes had the market cornered during the 1980s and early 90s when it came to vacation perils. Following what’s arguable his best work, the timeless classic Planes, Trains & Automobiles, Hughes returned to wholesome quality of a family getaway with The Great Outdoors, which is back on store shelves in Australia and for the first time on Blu-ray from Shock Entertainment. Arriving at a lakeside resort with the wife and kids in tow, Chicago family man Chet Ripley (John Candy) barely has time to take in the scenery when his in-laws show up uninvited, shattering hope for a peaceful retreat to nature.

I have fond memories of The Great Outdoors and when I heard it was returning to disc, appropriately on July 4th, I had the sudden urge to blast Wilson Pickett’s Land of a 1,000 Dances. Now having watched it, I’m pleased to say that many of the laughs are still there, but the film unfortunately lacks any connective tissue, resulting in what feels like just a fun series of incidents and misadventures. If you have nostalgia for this particular film or even this particular brand of brash comedy, you’ll likely always enjoy it as I do, but it’s not one I see winning a lot of new fans. Needless to say John Candy is his usual love-able self as the misfortunate Chet, while Dan Aykroyd as his obnoxious brother in-law Roman delivers a bombastic performance, which can be a little jarring at times. As for the Blu-ray itself, picture and sound are on par with each other in decent quality overall, although high-definition does prove to be quite revealing during one small scene.

Whether it be stomach churning Old 96er, the oldest “living” man in Canada or the hilarious encounter with a local prone to lightning strikes, when you think of one you can’t help but think of them all. The Great Outdoors may be on the lower end of the spectrum, but I like to think this welcome re-issue to home media is for the fans, and believe me we’re most grateful!

Note: The Great Outdoors is also available on DVD through Shock Entertainment.