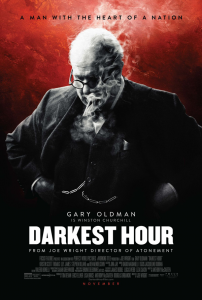 Upon arriving to the first session of Darkest Hour at my local cinema, I was surprised to see that a considerable amount of patrons had already taken their seats, most of whom were elderly citizens. My girlfriend and I were seated behind one gentleman, who to our amusement made it clear that he was quite the Winston Churchill enthusiast, with constant remarks such as “Oh look at Winston…”, followed by mild chuckling. Needless to say he enjoyed the film immensely, which follows the newly appointed British Prime Minister during the early days of World War II. Faced with grave circumstances, he must decide whether to negotiate with the tyrannical Adolf Hitler or fight on and endure against incredible odds.

There’s a feeling of familiarity that sinks in as the opening credit sequence give the audience a brief outline of the dire situation that surrounds our story, an early indication that Darkest Hour is nothing new and very conventional regarding biographical dramas on historical figures. Dialogue driven at its most emphatic, the film succeeds in echoing the sentiments and power behind Churchill’s convictions. However, a number of long-winded speeches slow the pacing down to a crawl, weighing down on the two-hour plus runtime. Gary Oldman’s transformation as the embattled world leader is reason enough alone to see this feature; delivering a most commanding performance of what is possibly the most authentic portrayal seen on screen. Ben Mendelsohn is a dignified presence as King George VI, who shares several scenes with his Prime Minister that were among some of my favourite, due to their slightly clumsy and awkward nature.

I’ve admired Winston Churchill for many years, which sprung from the small town named in his honour, where a monumental cigar stands erect and where my mother along with her parents eventually settled after migrating from Germany almost 60 years ago. Darkest Hour is a rousing piece despite its generic qualities and is currently playing in cinemas across Australia.