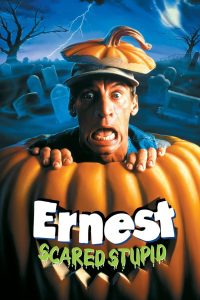 Ernest P. Worrell is undoubtedly a memorable character, and as someone who’s childhood coincided with his questionable peak in popularity, I knew then that the lovable man-child’s relegation to the direct-to-video market was almost a certainly. Suffice to say he unfortunately outstayed his welcome rather quickly. In what was the last film in the series to be released under the Disney label Touchstone Pictures, Ernest unleashes a centuries-old evil troll upon the citizens of Briarville, Missouri on the eve of Halloween, who then plots to turn the town’s children into wooden dolls.

I find the initial set-up for all these movies often raises some fairly obvious questions. For instance, in the case of Ernest Scared Stupid the most obvious would be why is he the only garbage man in the entire town? Once you put that little oddity aside, the film itself unfolds as a decent child oriented horror movie, which does at time push the limits of its PG rating. Creature effects for the troll, and his eventual troll army which sprout during the final act are the work of Chiodo brothers Charles, Edward and Stephen; the three men who gave us possibly the most unique horror/sci-fi mash-up of the 80s, Killer Klowns from Outer Space. Their efforts are a show-piece of the film and bring some much needed value to the overall production. The most noticeable drawback of this feature are the performances from the younger cast members. Granted, they do try their best but they unfortunately fail to hit that mark. Jim Varney as usual holds nothing back in his portrayal as Ernest. While his spontaneous monologues present his entourage of distinctive personalities, they do spout many obscure references that will likely be lost on its respective audience. Also worth mentioned is Eartha Kitt as the town’s erratic hermit who hold considerable knowledge of its ominous past.

Not all movies are as good as we remember them, but it’s the fond memories of those enjoyable viewings that entice us to revisit some of our old favourites. Sitting down recently to watch Ernest Scared Stupid for the first time in many years was a nostalgic experience for me at best. Despite is flaws, and there are a few, I think kids today would definitely find at least some enjoyment in this festive spook-out comedy.