There’s nothing quite like a war film to remin 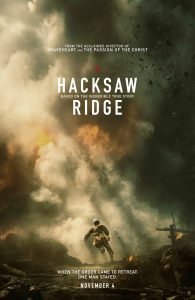 d us of the bravery and sacrifice of countless soldiers who fought for a better world; free of tyranny and oppression. However, these selfless acts are not confined to furiously charging into battle with the aid of a trusty rifle. Audiences are presented with something uniquely different in Mel Gibson’s much anticipated biography feature, Hacksaw Ridge, which tells of the remarkable acts of Army Medic Desmond T. Doss who served in Okinawa during WWII as a Conscientious Objector.

It’s very apparent that Mel Gibson is drawn to gallant individuals, and has had great success as film-maker in celebrating their ideals and heroism since his epic period piece Braveheart over twenty years ago. He sets up Doss’s story well, providing the viewer with an intimate insight into what led the young man towards his stance against committing violence; not to mention the dissent he subsequently faced from his peers. The film shifts gear in an instant when the savagery of what awaits the American soldiers is unleashed as they attempt to secure a treacherous escarpment; evoking a feeling dread for our defenceless protagonist. As a long-time fan of war pictures there is obviously a repetitive nature that comes with the celebrated genre, and while Hacksaw Ridge offers much of what we’ve seen before in the way of combat sequences, it still manages to pack a gut-wrenching punch. However, my issue lies with the film’s overall message which I found to be pushed too hard. There’s an assumption that the audience needs constant reminders of previously established themes and subtext. This approach bordered on becoming melodramatic especially during the film’s final act, which spoke volumes in action alone. On the plus side, Andrew Garfield is very effective as Desmond T. Doss, representing an admirable contrast between those who fight and those who choose to serve in a different capacity. Expressing valid anti-war sentiments is Hugo Weaving who is outstanding as Doss’s emotionally damaged father; heartbreaking evidence of the heavy toll that can be taken on a single human being. Supporting cast consists of predominantly Australian faces except for Vince Vaughn as mildly humours, Sgt Howell.

While the modest budget of $40 million does show in the large scale aspect of the production, Hacksaw Ridge is an important film and one that I am proud was made in Australia. Currently playing theatres across the nation, experience it on the big screen while you can.