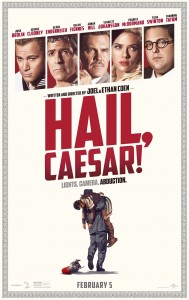 Prior to the release of True Grit in 2010, movie-goers could expect a new Coen Brother’s film every few years, however since the remake of the 1969 western, the output of the film-making duo has slowed considerably; I’m not complaining though, as the longer wait makes for more of a treat when their next feature hits cinemas. Opening last Thursday, Hail, Caesar!, is a star studded comedy-mystery centred on a Hollywood fixer in the 1950s named Eddie Mannix, who works tirelessly to keep the stars of a major studio in line while also trying to discovers the whereabouts of it’s biggest name star who suddenly vanishes during the filming of a biblical epic.

The most striking quality of this flamboyant feature is the rich aesthetics of Hollywood’s “Golden Age”, awash with vibrant shades of warm colouring, detailed set design, and impeccable costumes all which work to transport the audience back to a time when the studio reigned supreme, keeping their stable of stars on a short leash. The unique blend of dramatic comedy synonymous with the Coen Brothers is of it’s usual high standard, despite a distracting, and at times silly political sub-plot pertaining to the influence of Communist ideologies in popular screen-plays. One example of the pair’s signature use of ironic humour relate’s to the film’s biblical title and faux cinematic project which parallels our lead’s struggle with faith both on and off his move sets. This significant theme which appears throughout the picture, is expressed soulfully by an emphatic Josh Brolin. While highly proficient in his duty as a fixer, the character of Mannix struggles with self doubt and questions the overall importance and meaning of his job when the lure of a high-paid position elsewhere presents itself. Supporting cast are colourfully eccentric, each with their respective story-arcs, which serve as some of the most entertaining elements within the film; I was particularity impress with newcomer, Alden Ehrenreich as limitedly talented, but kind natured cowboy actor.

Unfortunately Hail, Caesar! didn’t quite meet my expectations, but it’s an overall fun and energetic depiction of the well-oiled movie making machine that is Hollywood.