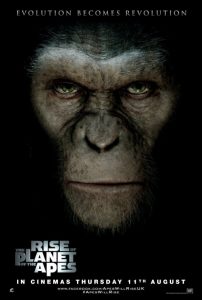 I wasn’t holding my breath when news broke of a new Planet of the Apes film almost eight years ago, but I was nonetheless curious. Fast forward to August 9th, 2011, discount Tuesday at my local cinema. I figured the cheaper price of admission would ease the blow if the film went south. As usual, there wasn’t an usher in sight to check my ticket so I saw myself in and took my seat with an equal feeling of excitement and apprehension. Unlike the 1968 original, our story begins not in the distant future, but present day San Francisco where scientist Will Rodman (James Franco) is working on a viral-based drug to cure Alzheimer’s disease. Through testing the substance on chimpanzees, it inadvertently gives rise to a super intelligent ape named Caesar, who after some time begins to question his identity.

There’s a great deal of emotion in Rise of the Planet of the Apes, much of which stems from the heartbreak of helplessly watching a loved one suffer, whether it be mental deterioration or inhumane treatment. Ironically it’s an act of love which serves as the catalyst for what ultimately becomes mankind’s tipping point, fueled by anger and hatred towards the powers that be. These poignant themes not only allow us to connect with our central characters, but lays the ground work what’s to come in later films. For a franchise originally known for its ground-breaking makeup effects, motion-capture is now the talking point among fans and film industry types. Andy Serkis, who portrays our protagonist Caesar, has elevated the technology through immense physicality derived from his performance and the almost photo-realistic digital effects vindicates the film’s reliance on computer-based resource. James Franco is excellent as the compassionate Will, who raises Caesar into adulthood while caring for his ailing father John played convincingly by John Lithgow.

Rise of the Planet of the Apes is a sombre, but powerful start to a trilogy of films that have well exceeded expectations. Fans are treated to numerous Easter eggs and references, both in acknowledging and respect for what came before.