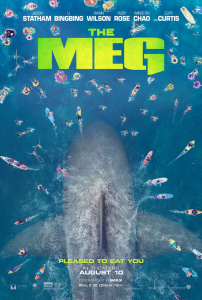 In this age of throwbacks and seemingly endless fanfare, B-movie bliss has been embraced by modern day creature-feature The Meg, which has lead one of the most fun and enthusiastic marketing campaigns in recent years. With countless posters, trailers, and online gimmicks, the build-up has been a treat within itself, sparking a slight monster movie resurgence.

Following a deep sea exploration of the Marianas Trench, scientists discover a 75m megalodon shark during a daring rescue mission. Inadvertently allowing the prehistoric beast to escape its hidden region, man of the hour Jonas Taylor (Jason Statham) must devise a plan to stop it before reaching the nearby populous. While it takes a little time to get going, The Meg is the type of brainless fun which serves as a timely reminded that fundamentally, movies are there to be enjoyed above all else. Encounters with our titular shark come in good measure, hinting at its immense size through ominous perspective shots from the various human characters. Needless to say the payoff is worth it and the presence of Meg does not diminish; inducing ample terror despite minimal blood and carnage, earning the film’s relatively soft M rating. Digital effects are surprisingly on the lower end of the spectrum, but are nonetheless eye-catching, especially during the many under water sequences. Performances from most supporting players feel phoned in, but leading man Jason Statham is tongue-and-cheek and very typical as our hero Jonas, while Rainn Wilson hams it up as callous billionaire Morris. Noticeable use of simple dialogue and a summery Asia-Pacific flare keeps the film ripe for the foreign market, which is clearly the studios agenda.

Rightfully defying all logic and common sense, The Meg is what it is, a movie about a giant shark. No more no less. Happily, in on its own joke with puns and many references to Jaws, people have welcomed this big-budget slice of monster madness, keeping the whole experience positive for everyone!