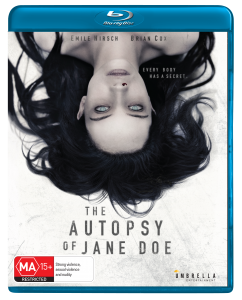 very fortunate for having been too distracted to read up on what appears to be a much talked about title among horror fans. To give you a basic rundown and to steer clear of any spoilers, a mystery body is found with no evidence of injury or foul play at grisly crime scenes. Later that night the unidentified corpse is handed over to the local coroners, a father and son, who must determine the cause of death. As they both begin their examination, things take a very strange and unsettling turn.

This may seem like an odd thing to say and this in no way a criticism, but The Autopsy of Jane Doe feels like an early 2000s horror film. Maybe it was absence of smart devices or just a general vibe. However, it was somewhat of a nostalgic reminder of the various new releases I was watching over a decade ago; titles that sudden veer down a dark back-road of our psyche. There’s a rarely a moment to ponder over what’s at play as abnormalities with the ominous cadaver pile up, testing the practical nature of our two protagonists. Confined within the walls of the family owned mortuary a strange other worldly feeling slowly begins to take hold of the viewer as the film progresses, reflected effectively through our main characters. Brian Cox is well cast as the emotionally distant father Tommy and Emile Hirsch is a nice counterweight and brings some levity as his son and protégée, Austin.

Now available through Umbrella Entertainment on Blu-ray, The Autopsy of Jane Doe is a must-own release, containing behind the scenes footage and one fascinating hours’ worth of cast and crew interviews. As a film that makes great use of sound, you feel every loud shudder and crash reverberate through your body thanks to a crystal clear DTS soundtrack, heightening the expense of this well-crafted little fright fest ten-fold!